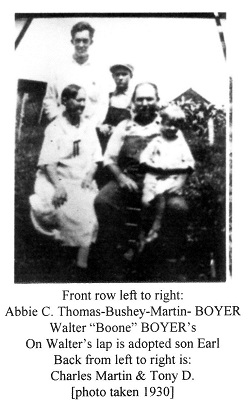 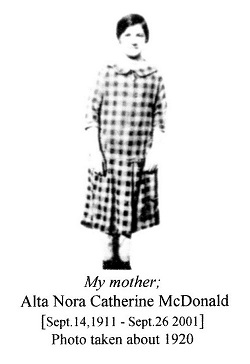 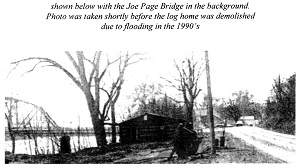 Sam Dolahite was a constable in Grafton when two sisters came in to town from Quincy, Illinois. The two women were my great aunts, Abbie and Lizzie Martin, and both had just left their husbands (between 1910-1915) who apparently were brothers. Abbie had a son Charles Martin and Lizzie had two daughters, Belle Martin and Laura Martin.

During this time a William Sikes needed help at home caring for his wife, Sarah. After talking with Constable Dolahite, Mr. Sikes decided to take in the two homeless and penniless ladies along with their children. (Mr. Sikes was a guard watchman at the powder plant east of Grafton.) Lizzie Martin did laundry for Mr. & Mrs. Sikes for 50 cents per day. Abbie Martin did much of the cooking, and both sisters shared the housecleaning.

Early on Abbie and Walter lived in a small house in Hardin while working for a dairy farmer and were paid mostly in eggs, milk, and meat. It was during this time when my mother's, Alta McDonald, parents gave her to Abbie & Walter for them to finish raising. She was around 10 years old at the time.

Sometime later Walter, who most people knew as "Boone," built the log cabin. Eventually it was moved from its original location in Calhoun County and put back together next to the Illinois River. After moving into the cabin and no longer working for the dairy farmer Walter "Boone" Boyer worked as a mail carrier and also became a very good fisherman with nets and baskets in both the Illinois and Mississippi rivers. Shorty Ellis was a talented fish-basket maker but drank up the money nearly as fast as he made it. Sometime after my mother had left the Boyer's household, and during the time of "prohibition." Boone Boyer became a bootlegger. A couple of the local youngsters used to make a few pennies by returning some of the empty whisky bottles to Boone.

The infamous Al Capone would import whiskey and send it down the Illinois river to be marketed to the "officials and politicians" of St. Louis … (Al Capone enjoyed spending time in Calhoun County, especially at a place called "Drag-out Hall," a business run by two Martin sisters, and Abbie and Lizzie.) … Walter "Boone" Boyer would meet the boat carrying the whiskey, sent by All Capone, north of Hardin behind the islands {Diamond Island) and transfer the fancy sealed bottles to his fishing boat, hide them under the fishing nets and would later ship them on down to St. Louis, Mo.