The Belle of Calhoun at Upper Hamburg Bay 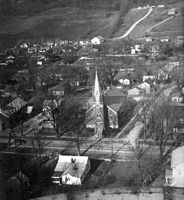 Bringing the Past to Light

Although the most important archeological expeditions in Illinois have been made during the decade, 1928-1938, as early as 1892 a pre-historic ruin on top of a high hill in Calhoun County yielded significant copper and stone relics, as well as a number of skeletons.

Unusually valuable evidence of early life have only recently been found by scientists from the Department of Anthropology of the University of Chicago in what was perhaps, a pre-historic fortification in Massac and Pope counties. Made of thick logs, and strategically located behind one of the sloughs of the Ohio River, it may have protected a village of aboriginal "mound builders." Ten mounds on the old Kincaid Homestead in Massac County, and nine mounds in Pope County, on the farm belonging to E. E. Lewis, comprise the group. Archeologists, who have been digging there each summer since 1934, call it the "Kincaid Site."

Other expeditions, directed by Dr. Fay Cooper-Cole, of the University, have worked in Rock Island, Adams, Will, Cook, DuPage, Jersey, St. Clair, and Fulton counties.

Extracted 19 Oct 2019 by Norma Hass from Stories from Illinois History, compiled by the Workers of the Writers' Program of the Work Projects Administration in the State of Illinois, published in 1940, page 27.