This is an eyewitness account of the shooting of Sheriff John Lammy by John H. Churchman who was a deputy.

THE TRUE FACTS OF HOW SHERIFF JOHN LAMMY WAS KILLED.

The following statement appeared in the Republican Newspaper, Sep. 1881 and was made by John H. Churchman who was a deputy and standing not twenty feet from Sheriff Lammy when he was fatally shot. The combined law forces of Calhoun and Pike County were grouped at Laurence Roth's farm. Pike County sheriff Blades was riding in a spring wagon with Henry Darr of Crooked Creek and had three deputies on horses. Blades decided to take his men and look in the area of West Panther Creek for the two Maxwell brothers, deadly killers, wanted by the law.

Sheriff Lammy had me (Churchman) to post a look-out for the outlaws at the Bay. When I got back to the Roth farm, Lammy with deputies Frank McNabb, Jim Hayes and G.W. Roberts were about to mount their horses and ride to the Barnes place to look for the Maxwells- when someone said "look south there at the end of Roth's field, a man is walking down the creek with a rifle on his shoulder". What we didn't know was, the other Maxwell brother was walking a few yards ahead, out of our view. I (Churchman) had a fast pony, rode straight for the creek to cut the fellow off and find out who he was. John Lammy rode with me and when I rode into the creek, Lammy turned down the road and was riding abreast of me along side the creek.

Frank McNabb rode to the end of Roth's field and into the creek. Frank and I were now riding slowly towards each other in the creek. I looked up ahead and saw Frank and shouted, "see anything of that fellow?' and at that moment one of the Maxwells jumped up from a fallen log and leveled a large bore rifle at Frank saying "step down from that horse or I'll blow your brains out." At that instant, I jumped off of my pony, pulling the reins through the crotch of a tree limb and shouted "shoot the son of a bitch, Frank!" I pulled my pistol and fired at Maxwell, hoping to give Frank a chance to make a move. Maxwell turned the rifle towards me and fired. At the same time he (Maxwell gave a loud whistle and the other brother came down the slope to the creek firing a hand gun. Frank Nabb jumped for cover when Maxwell started shooting in my direction. John Lammy fired his revolver from the roadside of the creek and Frank returned the outlaw's fire from where he took cover. The fight became general and I yelled for Jim Hayes and G.W. Roberts to bring their shotguns, Hayes & Roberts came down the creek sixty yards from the fight and took refuge behind a bend in the creek bank and did not use their shot guns which were loaded for the occasion. I was hit by a bullet from the big rifle, and another bullet hit and broke my pistol: Frank McNabb was wounded and no longer shooting: The outlaws stated coming my way: I was wounded and my gun broken so I made for John Lammy. As I (Churchman) ran past John Lammy, I shouted, "get out of here John or you will be killed in a second." I reached a large tree near the road and looked back: Lammy took a few more steps towards the creek and fired his revolver and then turned coming towards me to take cover and watching over his shoulder: At that instant, the outlaw with the rifle stepped into the clearing and fired one last shot, killing Sheriff Lammy. The Maxwells grabbed our horses nearby and escaped; after taking the life of brave Lammy. I make this statement in defense of Pike Co. Sheriff Blades criticism of the Maxwells attempted capture, but anyone with a thimble full of brains knows, no one under the circumstances could have planned anything, meeting the outlaws by chance the way we did. The two men with the shot guns which were never fired could have changed the outcome.

Two months later, Ed Maxwell was captured in Missouri and hanged for the killing of John Lammy, Hardin, Illinois. The other Maxwell was later found dead in Nebraska. 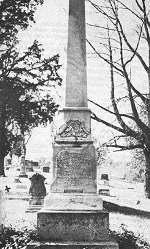 There is a large monument near the water tower in Hardin (purchased by Calhoun County) in his memory.

August 05, 2010
By MAGGIE BORMAN
The Telegraph
HARDIN - Three law enforcement officers killed while on duty and their families were honored Thursday at a memorial dedication ceremony on the Calhoun County Courthouse lawn, where a permanent memorial to the fallen men stands.

Calhoun County Sheriff John Lammy, who was shot to death at the age of 41, on Sept. 25, 1881, by two suspects wanted for murder in Wisconsin. As Lammy assisted one of his injured deputies near a creek bed near Mozier Island, he was shot in the head.

Maurice Lammy, great-nephew of John Lammy, spoke on behalf of the Lammy family; Calhoun County Chief Deputy Rob Hedger presented a U.S. flag to the Lammy family. The Rev. Paul Frazier, of the Hardin Presbyterian Church, read a copy of a speech that John Lammy gave at the 1876 Centennial ceremony. 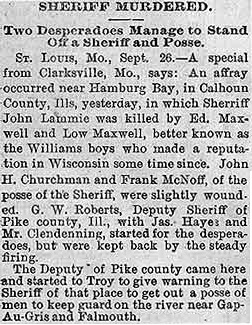 The suspects had been observed near Mozier Island by a deputy from the Pike County Sheriff's Department. The Pike County sheriff alerted Sheriff Lammy and the two sheriffs, along with their deputies, began searching for the men. The suspects were located walking along a dry creek bed near Bay, Illinois, by two members of the posse. A shootout ensued and the two deputies were wounded.

Sheriff Lammy heard the shots and immediately raced to the creek bed on his horse and joined in the shootout. As he assisted one of the wounded deputies to safety, he was shot in the head by one of the suspects who was firing a Winchester rifle.

The two suspects stole horses belonging to the deputies and fled the scene.

Sheriff Lammy had served as sheriff for seven years. He was survived by his father, two brothers and two sisters.
The two suspects were the notorious Williams brothers, Ed and Lon. Robbers and murderers for years they were regarded by Wisconsin citizens as being as great as Frank and Jesse James. On November 7, 1881, Ed was captured in Grand Island, Kansas. He was taken to Durand where he was seized by an angry mob and hanged from a tree. On October 29, 1882, Lon was captured in Dodge City, Kansas, and returned to Wisconsin. He mysteriously disappeared from the Durand jail.